Mendelico tunes up for George Johnson 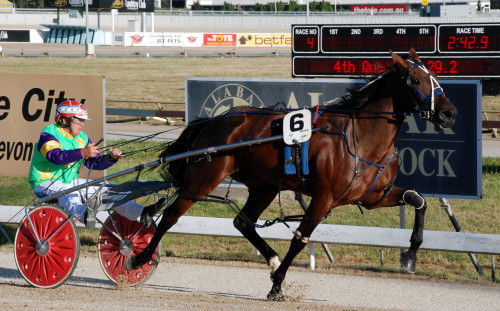 PROMINENT Victorian standardbred owner-breeder Harvey Delmenico knows what it’s like to race a good pacer so it came as no surprise when he led back Mendelico as the winner of the Alabar $20,000 Mother Of Pearl over 2200 metres in Launceston on Sunday night.

Mendelico showed early brilliance to lead comfortably from her wide front-row draw and once in control the daughter of Pacific Fella-Mini Maverick gave her rivals a pacing lesson as she strolled to an almost seven-metre victory over Miss Laura Jane with Dazed And Confused two metres away third.

Delmenico bred Mendelico that is a half-sister to his other former smart mare No More Trouble that won the $50,000 George Johnson in Tasmania two years ago.

“I’ve been racing these (pacers) since I was 15 and while there have been a lot of duds, I’ve been fortunate in recent years to have owned and bred some good ones and this mare is definitely in the silk department,” Mendelico said.

The four-year-old mare went into the race in top form with a win at MooneeValley and a second at Melton in top company good enough to convince punters to send her around the $2 favourite.

Delmenico confirmed Mendelico’s main mission is the George Johnson that will be run in Hobart next Sunday night.

“The George Johnson was always her main mission and it would be great to win that race again,” he said.

Listen to what owner Harvey Mendelico had to say about Mendelico’s win – click here .