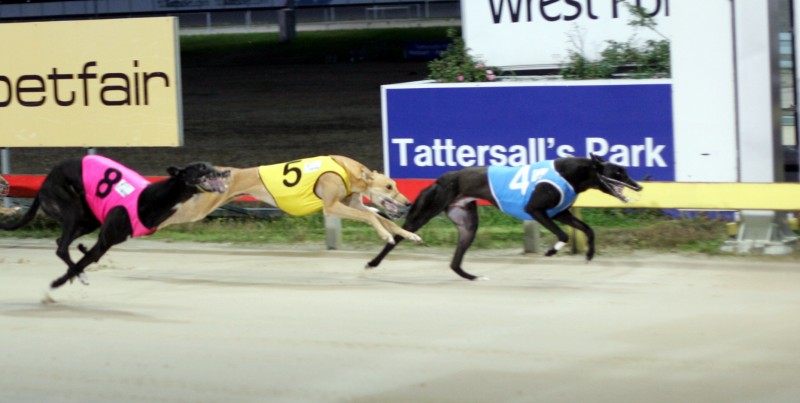 MIGHTY Serious gave his connections plenty to smile about when he broke his maiden status with an emphatic win in a heat of the Easter Purse at Tattersall’s Park in Hobart last night.

The Darren Macdonald-trained son of Where’s Pedro began brilliantly from box four and after matching motors with Muckle Flugga to the top turn he slipped clear and went on to defeat that dog and Sentry Duty that flashed home to dead-heat for second.

Mighty Serious, trained at Invermay by Eileen Thomas, stopped the cock at 2631 that was the quickest of the three heat winners.

It was the dog’s first win but he went into the race having notched eight minor placings from 11 previous outings.

The second heat of the Purse was delayed for almost an hour due to a malfunction with the  track lights.

But the delay did not deter Boo Icy You that ran home powerfully to grab race leader Hypo Holly right on the line and score by the narrowest possible margin.

It was an impressive win as the Laurie Hills-trained bitch had to overcome being crowded early but once clear she set sail after Hypo Holly and stuck her nose to get the nod in the last stride.

It was Boo Icy You’s second win from only six starts as she had been successful in a juvenile over 515m in Launceston earlier this month.

Top trainer Ted Medhurst will be represented in Thursday night’s final by Lecture that made an impressive debut in his heat.

Lecture showed good early speed to share the lead with Arnhem Warrior  but when they wheeled for home Medhurst’s dog burst clear and went on to score by over four lengths from Arnhem Warrior with Melissa Gaye a closing third.

Lecture (Go Wild Teddy-Josetta Bale) ran the 461-metre trip in 26.49 but the race was run during a downpour.