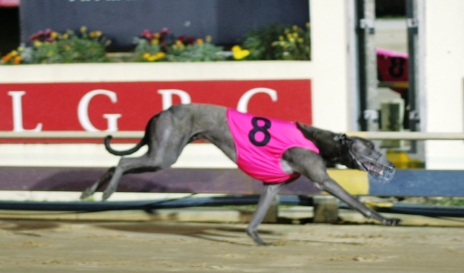 Lightly raced dog Miki Moto Mike notched the biggest win of his short racing career when he powered his way to victory in the final of the Furniture City Gift at The TOTE Racing Centre in Launceston on Monday night.

The Gary Fahey-trained dog delivered a mirror performance of his heat win but this time his winning margin over Bosco was 7-1/2 lengths which was three lengths better than his heat win.

Miki Moto Mike began slowly from box eight but so quickly did he muster speed he was in front at the point of the first turn giving Bosco a nudge as he crossed to the rail.

He extended his lead heading down the back stretch and nothing was able to take ground off him in the run home.

Bosco tried valiantly to make a race of it while Posh Choice and Buckle Up Doug battled it out for third but over three lengths astern.

The victory made it a hat trick of wins by the son of Collision-Brami’s First).

It was his fifth win from only 12 starts.