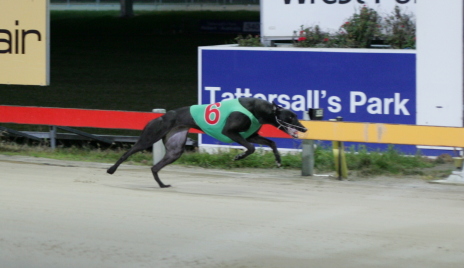 AFTER having her colours lowered by another aspiring star in Launceston, Millie Grace bounced back to the winner’s circle with an impressive win in a grade five event over 461 metres in Hobart last Thursday night.

Millie Grace flew the lids from box six and once on the lure she careered away from her rivals and went on to score by over three lengths from Wicked Potion with Blue Tongued Boy a half-length away third.

The Mick Stringer-trained bitch won her heat and final of the Laurels at her first two outings and it took a real smart one in Jethro to ruin her perfect record in Launceston last Monday week.

Millie Grace burst onto the scene with an impressive win in her Laurels heat, defeating the in-form Peejay Tadmore by a narrow margin but she improved to win the final comfortably from the promising Irinka Julia.

She led at her first try on the Launceston circuit and looked home only to be run down by Jethro in the last couple of strides with the winner clocking a handy 30.18 over the 515-metre trip

Millie Grace is owned and raced by Karlene Cuthbertson and Sally Wilson who have had a lot of success in the past year and it would appear they are destined to remain regular visitors to the winner’s circle with this latest addition to their team.