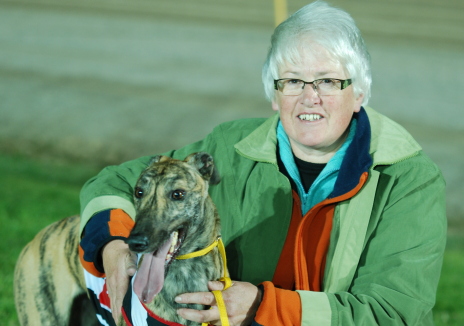 THE juggernaut rolled on inHobartlast night (Thursday) for owner-breeders Karlene Cuthbertson and Sally-Ann Wilson when their impressive juvenile bitch Millie Minor won a heat of the TGOTBA series on debut.

Millie Minor, trained at Brighton by Mick Stringer, missed the start by a length from box two but quickly made up for the tardy beginning by zooming along the rail and one by one she pecked off her rivals before assuming the lead nearing the top turn.

The well-bred bitch then forged clear and stormed home to stop the clock at 26.17s which was brilliant given the bitter cold and windy conditions.

Millie Minor (Where’s Pedro-Smart and Sassy) was whelped in October 2010 and is one of a litter of six comprising five bitches and a dog.

“This pup showed a lot of ability from the outset,” Cuthbertson said.

“But to come out and clock 26.17 at her first start in a race and in these tough conditions suggests she could be as good as we first thought,” she said.

Cuthbertson and Wilson bred the litter from her broodbitch Smart and Sassy that was trained by Leigh Wood.

“I bought Smart and Sassy from Sarah Pringle (Monaghan) and the bitch won the Queensland Futurity and a 600-metre race inAdelaidebefore coming back to Tassie and she won a lot of races for us here when Leigh Wood trained her.”

Unfortunately the litter comprising Millie Minor is Smart and Sassy’s last as she died about 11 months ago.

“It was sad losing Smart and Sassy last year but she won’t be forgotten thanks to this litter,” Cuthbertson said.

While Millie Minor was impressive, so too was the John “Beau” Shanahan-trained Just As Fancy kept his unbeaten record inTasmaniaintact with an all-the-way win in his TGOTBA division three heat.

Just As Fancy began brilliantly from box three to lead and all the rest of the field saw in the chase was his hind legs.

The powerfully built dog (Premier Fantasy-Flash Fancy) was impressive in scoring by eight lengths from Draft Pick (4) with Chinatown Bess (5) doing her best work at the end to grab third and a place in the final.

Just As fancy’s time of 26.13 would suggest he will be a worthy rival for Millie Minor in the final.

The remaining division three heat was taken out by Rise Of Taj from the Len Howard kennel.

Rise Of Taj (Big Daddy Cool-Odile) was sent out the rank outsider at $50 but his good box manners and early speed ensured he missed the trouble and he ran a straight line from box seven to the top turn.

Winklee Storm matched it with Rise Of Taj in the home straight but Howard’s dog kept finding and hit the line with a neck to spare over Winklee Storm with the favourite Gracie almost four lengths astern.

Gracie is a litter sister to Millie Minor and she too was making her debut but she missed the start by three lengths and then took fairy-like steps when she almost crashed into the back of the field just passing the 340-metre boxes.

Gracie made up many lengths to grab third and qualify for a berth in the final in which she will start from box two.

The first two placegetters and the two fastest thirds qualified for a final berth.

Just As fancy will start from box three in the final while Millie Minor will be next door in box four and the other heat winner Rise Of Taj will wear the yellow vest.

Box draw for the final: