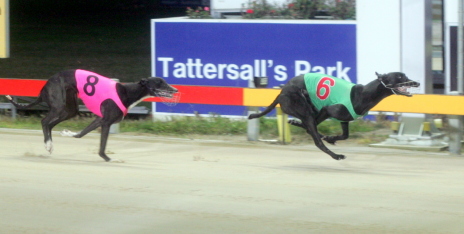 MILLE GRACE expanded her owners’ run of wins in feature races when she outclassed a hot field in the Charmer Lodge Laurels final over 461 metres at Tattersall’s Park in Hobart last Thursday night.

The Mick Stringer-trained bitch again showed early brilliance to lead from box six and set up a winning break by the time she reached the home turn.

Irinka Julie made a late charge over the concluding stages but Stringer’s bitch dug deep and went on to win by 1-1/2 lengths.

Millie Grace, owned and raced by Karlene Cuthbertson and Sally Wilson, was having only her second start with her only other outing resulting in a win in a Laurels heat.

“She is a very smart bitch with good manners and that’s going to help her when she gets up in grade,” Stringer said.

“She will improve with racing so I’d say she has a bright future,” he said.

Millie Grace clocked 26.30s in winning her Laurels heat but she cut that down to 26.12s in the final.