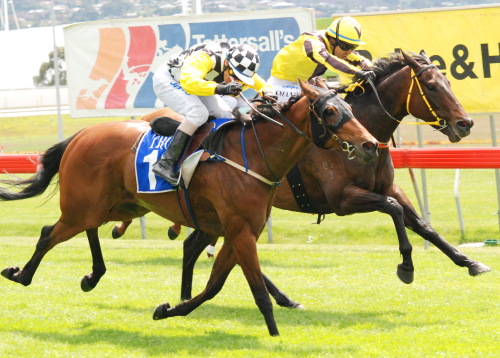 STAR middle distance galloper Milochello earned the tag “Iron Horse” after he powered his way to another impressive win in Hobart, this time lugging 61 kilograms.

For a horse that is not blessed with a lot of height he has been forced to carry big imposts for much of this preparation but to his credit he has been able to overcome the weight adversity with sheer courage and ability.

Premier jockey Brendon McCoull has also been afforded the luxury of sitting on a heavy and well-padded saddle when riding Milochello this preparation instead of the paper weight plastic things that most riders use when riding at 55kg or thereabouts.

Milochello’s trainer Jason Clifford said this latest win was probably one of the six-year-old’s best but having been up a while he is more than likely aiming the gelding at one more effort over 2100m before sending his stable star for a spell.

Listen to what Milochello’s trainer Jason Clifford had to say about this latest win – click here .