Minister’s Gift a buzz for “Bear” 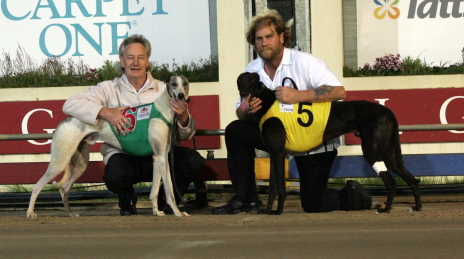 THE final of the 2012 Minister’s Gift in Launceston on Monday night was a fitting end to a series that has for many years spawned a future star.

The three dogs that each won both of their heats on the way to the final fought out the finish and it was prominent North-West owner-breeder -trainer Gerard “Bear” Allford who was rewarded with the spoils of the rich final that netted the connections of the winner a $10,000 cheque.

But Bearville Phil (Give Me Five-0Von’s Angel) defied a chequered run over the last 300 metres to get up in the last stride to defeat his sibling by a head with Captain Cosmic just over two lengths away third.

It was a great result for Allford who has bred some very good litters over the years but this latest offering is one of the best.

Bearville Phil has been a model of consistency of late with this his fourth win in succession.

He won a grade four in Hobart before heading to Devonport for a heat of the Minister’s Gift which he won by a narrow margin over Bubble Gump.

He then out-plugged Lashing Annie in his Minister’s Gift heat in Hobart for what was a courageous effort.

On Monday night he began only fairly from box six while Bearville Boy flew the lids from box five to lead comfortably at the first turn.

Bearville Boy extended the margin heading down the back stretch with Captain Cosmic in pursuit with Bearville Phil trying to make his move from midfield.

Turning for home it looked as if Bearville Boy had a big enough break but when his brother saw daylight close to home he surged to get the result right on the line.