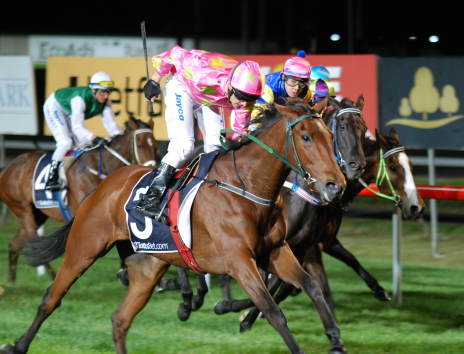 SPREYTON hobby trainer Darren Kenny is contemplating aiming his talented middle distance performer Tree Bandit for some of the minor cups in the New Year.

Tree Bandit made it two wins from three starts when he came from last to score an impressive victory in the Betfair benchmark 68 Handicap over 2100 metres at The TOTE Racing Centre in Launceston last Wednesday night.

It was the five-year-old gelding’s first win at the distance from six tries.

Kenny marvels at Tree bandit’s capabilities and admits it is this horse that encouraged him to renew his trainer’s licence.

“Tree Bandit is the reason I came back to training horses,” Kenny said.

“I’ve also got Kenjorwood and he looks like going on from his good two-year-old season but Tree Bandit is just a marvel,” he said.

Tree Bandit (Kelvin Sanderson) settled back in the small field of seven while Manhattan Rose led and had company on his outside in Testa Jesta from the 1000m to the home turn.

Oxy Angel made her move and loomed as the winner in the home straight but when Sanderson called on Tree Bandit to extend 200 metres out he quickly hailed in the leaders and went on to win well.

“If the horse continues to do well then we’ll probably have a look at a couple of the minor cups after Christmas,” Kenny said.