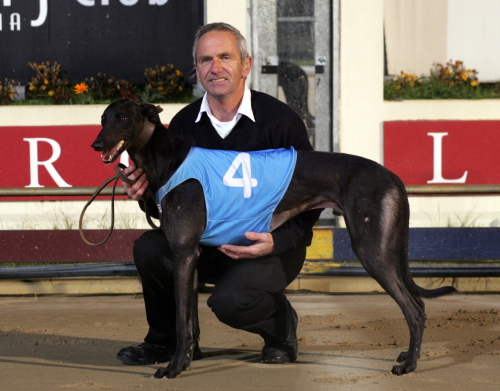 ONE of Tasmania’s most promising chasers Luke’s A Missile capped a great month when he powered his way to an effortless win in the Rapidvite Tasmanian Derby in Launceston tonight (Monday).

Luke’s A Missile was impressive in winning his heat clocking a personal best time of 29.95 for the 515-metre trip.

The Allan Clark-trained dog mirrored that effort by spearing to the lead from box four and he was never headed on his way to a six-length win over Decembrist with outsider Bronko Pete two lengths away third.

Luke’s A Missile was sent out the favourite but at the lucrative odds of $3.30.

It was the dog’s seventh win from his past 10 starts in the space of a month.

Luke’s A Missile (Path To Power-Ebony Esprit) is owned by the Allen Hellyeah Syndicate which is managed by Ron Donaldson.

Clark has been mixing Luke’s A Missile’s distances and while the dog has emerged triumphant in all three races beyond 580m, they also have proved to be great conditioning races.