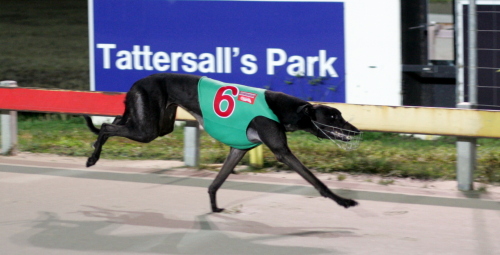 LEADING trainer Anthony Bullock celebrated his birthday last night (Thursday) and his present was delivered in the first race on the 10-evcent card in Hobart.

Luke’s A Missile has shown a liking for the middle distances and made the 599-metre trip on the Tattersall’s Park circuit look easy.

He began well from box six and once on the lure he burst clear and went on to score as he liked over Smart Mission and Yellow Wood Trey.

It was his Posh Di has been denied a few feature wins when she’d led and been run down at the business end of proceedings but this time she was the swooper.

A hot pace was set by Zamira that led from box two and held a two-length advantage on his rivals turning for home.

But when Posh Di ($5.40) put in the big strides she quickly assumed control and went on to defeat the pods-on favourite Thirteen Black ($1.90) by a half-length with Zamira hanging on for third over three lengths astern.

It was Posh Di’s fourth win from a dozen starts on the Hobart track but she also has notched six minor placings.

Her overall record stands at 10 wins and as many placings from 29 outings.