Mission accomplished for Another Dreamer 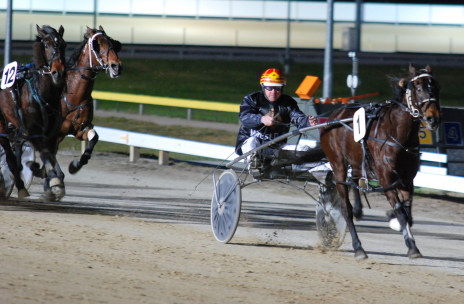 BRIGHTON trainer Rodney Ashwood has a mission to secure a win for two-year-old Another Dreamer before sending him for a well-earned spell.

The gelding accomplished the mission at Tattersall’s Park in Hobart last Sunday night with an effortless all-the-way win in a 2CO over 1609 metres.

With the trainer’s twin brother Paul Ashwood in the sulky, Another Dreamer stepped straight to the front from the pole position and always had had the race in his keeping, scoring by almost four metres from stablemate Mister Ryanjack with Odins Starfire just over a metre astern.

Ashwood said he was about to send Another Dreamer (Dream Away-Sophie Ellen) for a spell but opted to try one more time for a win before sending him to the paddock.

The gelding is bred in the purple being by a world renowned sire and from a mare that is from Marlee Jayne that is considered one of the best producers of all time.

Sophie Ellen won four and placed five times from only nine starts before being retired to stud due to a leg injury sustained in training.

Her dam Marlee Jayne has produced eight to race and all have won.

Her best progeny include Lourdes that won 36 and placed 45 times and she went to the US and recorded a mile rate of 1m.51.4s at Yonkers

Listen to what trainer Rodney Ashwood had to say about Another Dreamer’s win – click here.