Mission accomplished for smart Victorian 4YO 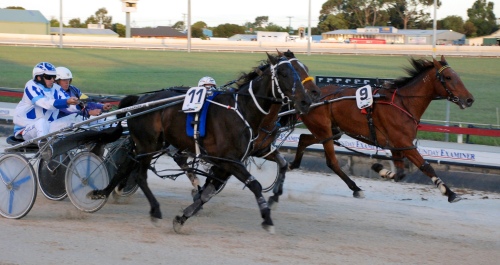 The son of Courage Under Fire tuned up for his main mission in Hobart a week earlier with a commanding win in a C2-C3 but last night the gelding left no doubt that he is a horse with a very bright future.

With one of Australia’s best reinsmen Daryl Douglas in the sulky, the four-year-old parked three-wide on the back of Shez Ryleymak for the last lap before forging clear close to home to score from Babyitsu with Shez Ryleymak.

“We brought this horse to Tassie with this race (Gold Label) as his main target so whatever else he does while he’s here will be a bonus,” McDonough said.

“He will miss going around in Launceston next Sunday night but there’s a C4-6 in Hobart the following Sunday (December 27) that he’ll have a crack at and then we are back to Victoria.”

“I’m very happy with the way this horse has come to hand this preparation and hopefully he will carry this form back to Victoria,” he said.

I Pity The Fool led with Babyitsu parked in the breeze after they had travelled 400 metres, with Shez Ryleymak near last and Rowan Direct on her back.

As the field wheeled into the home straight to get the bell Shez Ryleymak’s driver-trainer Rohan Hillier eased out three-wide to make his move and Douglas was able to get a cart home on the mare’s back.

Babyitsu forged to the lead down the back straight the last time but was put under pressure soon after by Shez Ryleymak with Rowan Direct making a line of three as they turned for home.

After having the softest run of the trio, Rowan Direct edged clear close to home to score by a half-metre from Babyitsu with Shez Ryleymak a half-head astern.

While the runs of the first two placegetters were full of merit, it was Shez Ryleymak’s first run for seven months and she will no doubt derive great benefit and now go into the $50,000 George Johnson in Hobart in a fortnight as the favourite of the local brigade.