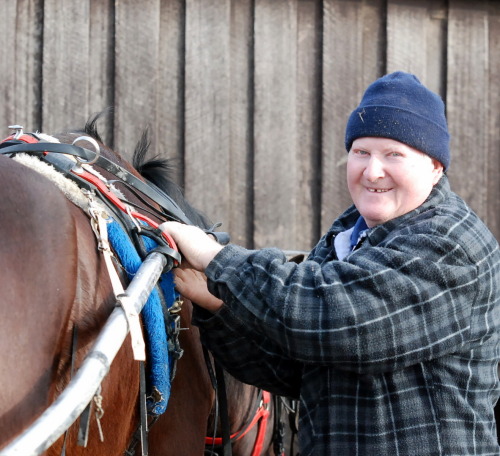 VETERAN harness racing trainer Tommy Jackson is one of the most down to earth people anyone would care to meet and it is his love of country folk that has him eagerly awaiting his next trip to the New Year Day meeting at St Marys on Tasmania’s East Coast.

Jackson celebrated one of his best wins in Devonport last Sunday night when his gallant eight-year-old Mister Gallenti won the Sheffield Cup.

Mister Gallenti was taken to the front midrace by ace driver Nathan Ford and when he called on the gelding for the supreme effort leaving the back straight the last time he powered away from his rivals and went on to score by 20 metres from In Cruise Mode and the well-backed Hellfire Boy.

It was Mister Gallenti’s first win since April last year but Jackson never gave up home of him again striking winning form.

“I have gone back to training him like I did when he was a top three-year-old,” Jackson said.

“He does only light work – I hopple him slowly over long distances and let him dash up 200 metres.”

“And I’ve altered his feed. I now mix my own just like I used to. I don’t think the bought feed (pre-mixed) was suiting him as he was leaving a lot of it but he doesn’t leave a grain now,” he said.

Jackson says he loves country racing – in fact he thrives on it.

“I won the St Marys Cup a long time ago with a horse named Comenchero and I’d love to win it again.”

Comenchero won the St Marys Cup 41 years ago so it’s been a long time between celebratory drinks fort the astute horseman.

“I love going to St Marys – I’ll take five or six horses there, take a picnic lunch and have a ball.”

“The best thing is you meet a lot of good country people and that’s what racing is about.”

“It’s the same here at Devonport – I’m a long way from home but I know three-quarters of the people on track,” he said.