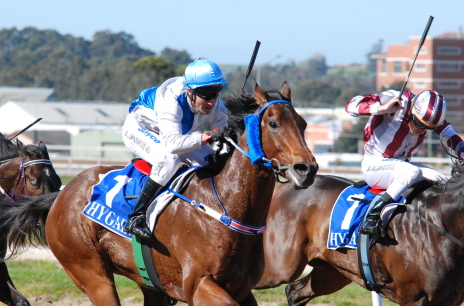 THREE-year-old Mister John proved he is a rising star of Tasmanian racing when he powered his way to an impressive first-up win in a class two handicap over 1150 metres at Tapeta Park Spreyton on Sunday.

Instead of having to pay to trial, the gelding’s owners Dr. John Burke and his wife Elizabeth earned $8125 which was the winner’s share of the prizemoney.

Mister John won both of his starts last season and was returning to racing from a four-month spell.

However, it was no cakewalk for the gelded son of Strada-Kats Clause.

Jockey David Pires said Mister John raced greenly throughout the race and coming to the home turn he thought for a moment that he might struggle to fill a place.

But when Pires called on his charge for the big effort about 100 metres from home the gelding hauled in the leaders and went on to score by 1-1/2 lengths from interstate invader Zeybek, prepared in Victoria by Craig Conron, with the Charlie Goggin and Luella Meaburn-trained Tap It In a half-length away third and just in advance of Little River Girl

Dr. Burke said he would talk to the trainer to discuss the possibility of sending the gelding to Melbourne for one or two starts instead of targeting the $30,000 3YO Cup in Launceston on December 5.

The $90,000 Tasmanian Guineas over 1600 metres in Launceston on January 2 is Mister John’s main aim this preparation.