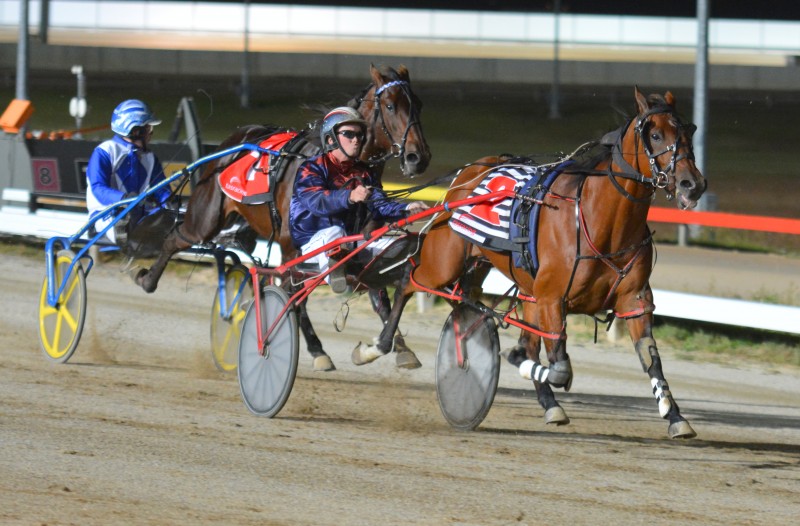 Cooper owns many pacers but he also dabbles in thoroughbreds and last Wednesday night two of his gallopers, Meconsul and Tycoon Navigator, won impressively for trainer Gary White in Launceston.

But Mister Lennox’s brilliant Derby victory surpassed all the excitement of last Wednesday night and then some.

“This is the biggest win I’ve had in harness racing and he is a horse that I race with my children Shane, Stuart, Maree and Christopher and that’s what makes it so brilliant,” Cooper said.

“I set out to pick what I hoped would be my best horse to race with the children and it looks like I succeeded,” he said.

Mister Lennox (Changeover-Taupeka Osprey) was bred in New Zealand and purchased by Cooper as a going two-year-old.

He is trained by Juanita McKenzie who has always believed the gelding was capable of winning a feature race.

After he won a race in Hobart last Sunday night McKenzie felt his win wasn’t impressive enough so she set about upping his work rate on the training track through the week and it worked wonders.

The favourite Mojo Major ($1.70) drew the pole position and had no trouble in finding the lead while Gareth Rattray aboard Mister Lennox was content to take the sit behind the leader with Four Ex Dan settled third and all were in Indian file for the first two laps.

The well backed No Spring Secrets galloped at the start and lost considerable ground but had tacked on after traveling 600 metres.

Rohan Hillier was the first to leave the fence and he did so 700m from home but at the same time Rattray eased his charge off the fence to move to the leader’s wheel.

Mojo Major looked to be holding his rivals comfortably but when Rattray called on Mister Lenox for the big effort in the home straight the gelding forged clear and went on to score by almost five metres from Mojo major with Four Ex Dan over 12 metres away third and clear of No Spring Secrets.