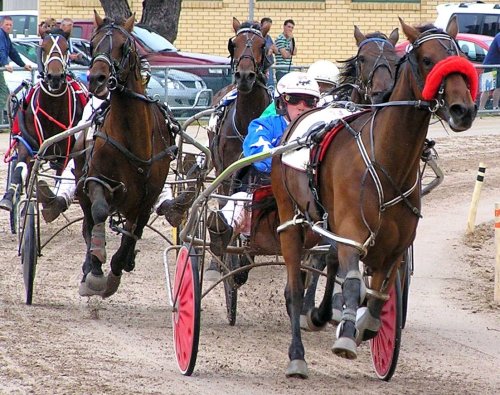 MISTER TEHAYCH recaptured his best form to score an impressive win in the Latrobe Cup at Devonport on Sunday night.

The Craig Hayes-trained five-year-old had failed in the Carrick Cup at his previous start but with premier reinsman Gareth Rattray in the cart Mister Tehaych settled just worse than midfield and always looked to be travelling like the winner.

Rattray e4ased his charge into the three-wide line and sprinted to the leaders quickly leaving the back straight and had three metres to spare over Forty Two Grand that got a late split with Dodgermemate a game third two metres astern.

Rattray has had a long association with the winner having shared the gelding’s first win as a two-year-old at Burnie and he has partnered the son of Topnotcher in all but six of his 35 starts.

Rattray said Mister Tehaych’s run in the Carrick Cup at his previous start was out of character.

“I think he was just a bit jaded after a couple of runs in longer distance races,” Rattray said.

“I thought he had a bit of a class edge in this race and once he settled in front of Dodgermemate he was in a winning position and he finished it off well,” he said.

Dodgermemate was unable to get across from his wide front-row draw and driver Keith Toulmin was forced to ease his charge back to the rear.

He tried to latch onto the back of Mister Tehaych when he made his more but Dodger was unable to muster the speed to get the trail in the three-wide line.