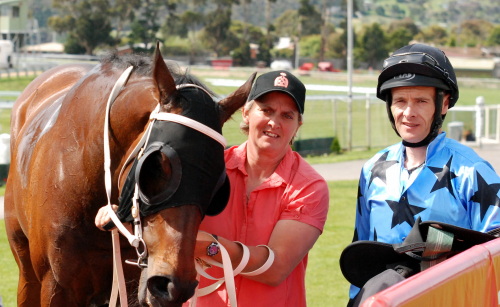 With in-form jockey Kelvin Sanderson in the saddle, Darmasanda was allowed to settle worse than midfield before creeping into the race three-wide from the 700-metre mark.

She loomed alongside race leader Predator but at one stage looked as if she would have to settle for second.

However, under strong riding she gained the upper hand right on the line to defeat Predator by a half-head with Divine decree third just in advance of Savour The Fun.

Darmasanda was having only her seventh career start and her fifth outing this preparation.

She won on debut last season and after one more run she was sent to the paddock.

Mollross said the mare should have had better form that what showed in the race book.

Listen to what trainer Tammy Mollross had to say about Darmasanda’s win .