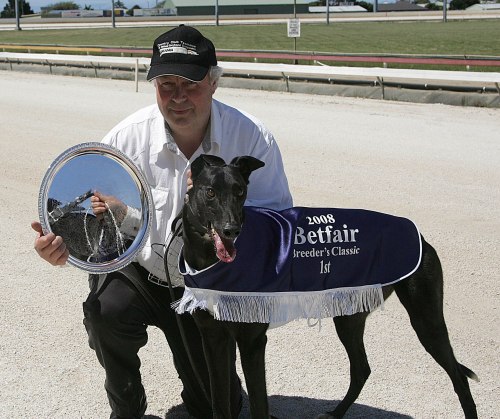 CLASS chaser Stylish Monty gave his rivals a galloping lesson at Devonport on Tuesday scoring a runaway win in mixed grade 4/5 over 580 metres.

The Tony Dawson-trained dog had won his previous three starts impressively but his test was stepping up to the longer 580-metre journey.

But he handled it with consummate ease, scoring by three lengths from Absolute Moral with Montague Sue third, just in advance of Wansborough.

Stylish Monty has been a model of consistency this season with his goods box manners and genuine keenness to chase the lure the ingredients that makes him such an awesome competitor.

Stylish Monty (by Where’s Pedro) was bred by the trainer’s mother Bertha Dawson, from her outstanding broodbitch Stylish Dotty.

The dog has won 13 times on the Devonport circuit and also notched five minor placings from 21 starts but his career statistics are equally as impressive having won 23 and been placed 14 times from only 44 outings for stakes closing in on $40,000.