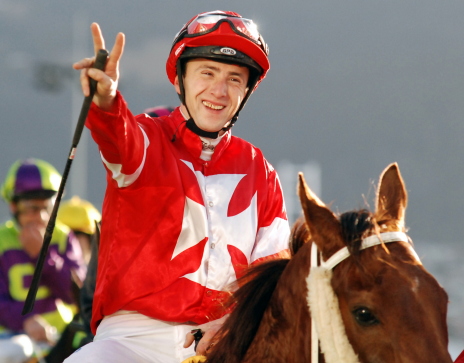 TALENTED apprentice Bulent Muchu celebrated his best day at the office with a treble at Tattersall’s Park in Hobart on Sunday.

Muchu’s treble included the winner of the feature race in Secuma that powered home for a bold first-up triumph in the 1100-metre sprint on a heavy track.

Muchu also scored aboard This Moment and eight-year-old veteran Centenary Diamond for his master Walter McShane while the other two are trained by Brendan McShane.

Centenary Diamond won at bolter’s odds and understandably so given the gelding had not won for over two years but the trainer was not fazed by the anomaly, even predicting another win might be just around the corner.

While Centenary Diamond’s win lifted the spirit of the trainer he was more impressed with the effort of his stable apprentice.

Muchu arrived from Turkey just over a year ago to join his friend and fellow Turkish-born apprentice Rasit Yetimova at McShane’s Broadmarsh stables.

It was a bumpy road for Muchu early on with run-ins with the stewards over his daring exploits that at one stage caused senior riders to question his respect for safety and the well being of his fellow riders during a race.

But after a trip back to Turkey to ponder his future he returned and spent time under the watchful eye of Victorian stewards and he came out on the flip side a better and more competent rider.

Muchu has ridden 19 winners (including one dead-heat) this season along with 40 minor placings but the interesting statistic is that he has weighed in 98 times from 166 rides.

One horse that Muchu hopes to keep winning on is This Moment that delivered a top class effort to take out the Wakeful on Facebook Benchmark 68 Handicap over 1600 metres.

This Moment has shown great improvement this preparation and her trainer Brendan McShane is confident there are m ore wins in store for the rest of remainder of her winter preparation.

Listen to what trainer Brendan McShane had to say about This Moment’s latest win – click here .