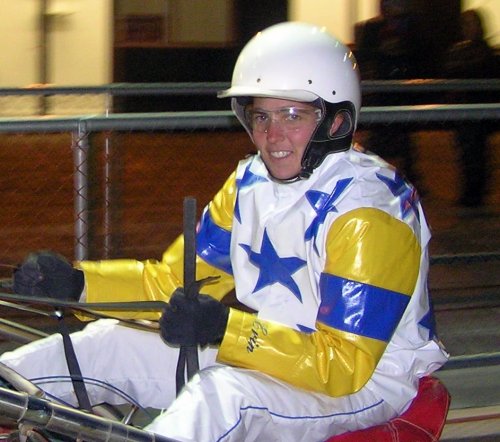 BRIDPORT trainer and his partner Erin Hollaway celebrated the first day of the New Year in style when they teamed up to win the St Marys Cup with underrated gelding Murillo Bromac.

With Hollaway in the cart, Murillo Bromac ($13.70) defied a back mark of 20 metres and racing on grass for the first time to power his way to victory in the feature on the 10-event card, scoring by a half-head from the favourite Billabong Bertie ($3.70) with Nobeer Nocheer a metre astern.

It was a timely win for the driver as Hollaway had been in the wars of late, suffering a badly bruised shoulder from a kick received from star pacer Gedlee at a meeting in Launceston three weeks ago.

Murillo Bromac (Badlands Hanover-Monet) began brilliantly from the standing start and Hollaway was patient as she allowed her charge to move into the race gradually just over a lap from home.

When Nobeer Nocheer loomed 400m out to take the lead and Billabong Bertie arrived on the scene to challenge it looked as if they would fight it out but neither could withstand Murillo Bromac’s powerful finish.

The race was run in front of an estimated record crowd of around 3500 that gathered for the St Mary’s pacing Club’s annual and only meeting for the year.

The win took New Zealand-bred Murillo Bromac’s record for the season to three wins and a minor placing from seven starts.