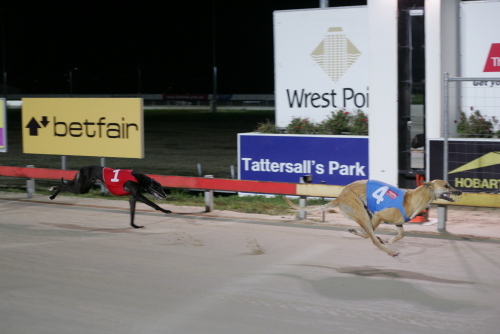 Mushy Peas owned by Mike Hardy and trained at Leith by Gary Johnson jumped fast and continued his great run of form with an all the way win at Devonport yesterday.

In his last ten starts this Shiokaze pup has won four and been placed on the other six occassions and followed on from his top win at Hobart last Thursday night.

National Vision chased hard for second after been held up early while Tombstone Jack hurt his duclaw in the run and had to have stitches, so it may pay to forget the run although finishing a creditable third.

The Betfair Puppy Championship Final next week looks like a match in two after the heats yesterday.

I’m a Fencer trained by David Crosswell and Mr Issues trained by Gary Johnson clearly look the two to beat.

Juvenile to score well while Susan Gittus made it six winners in two days when Miss Glory , Dr Alosaurus and Droopy’s State all saluted.