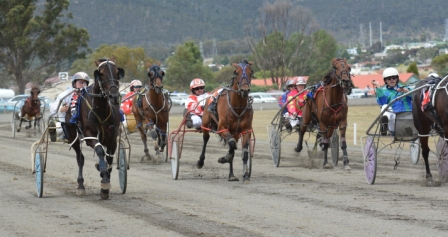 With premier reinsman Gareth Rattray aboard the gelding settled worse than midfield despite stepping cleanly from his front row draw (2) while a hot pace was set by Put Mback (Michael Laugher) while The Dip faced the breeze ahead of Whisper Jet that began brilliantly from his 20-metre handicap.

It was Rattray’s second New Norfolk Cup win in succession having been successful aboard Put Mback the previous year.

Put Mback started at $31 while Musselroe Bay was more fancied starting at $9.

When the tempo quickened at the bell the back markers struggled to get into the race down the back straight the last time and turning for home it looked likely that the leaders would fight out the finish.

But Musselroe Bay emerged from the pack to set sail after the leaders and once balance at the top of the straight he powered home to overhaul the leaders close to home to score narrowly from Whisper Jet, Damitsam and The Dip that stuck to his task gamely after facing the breeze throughout.

A big crowd ventured to New Norfolk for the club’s only meeting for the season that boasted seven races with the Cup and the Ted Plunkett Memorial the features on the card.

The Ted Plunkett was won by the David Pennicott-trained Strange Conduct that also was driven by Rattray.

Strange Conduct powered home to score by 10 metres from Grinable with Helen Wheels, that started off a 10-metre handicap, was 3-1/2 metres away third.