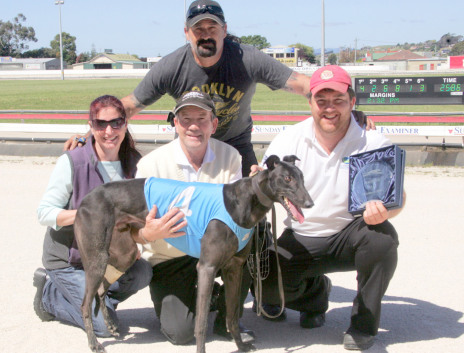 BUTCH DEVERELL is one of Tasmania’s most astute greyhound trainers and when he sets a dog for a feature race series they invariably make the final and often emerge triumphant in the final.

Such was the case with Awesome Naz, a dog he took on when others found it difficult to get the best get him to perform at his optimum level.

Penny’s Angel hugged the rail to take the lead at the top turn and looked set for victory when they straightened for the run home but Awesome Naz had other ideas and burst through along the rails to hit the front in the shadows of the post.

“The dog showed ability when he first started racing when prepared by Mick Sherriff but he turned his head one day in a race and after a while Mick and the owner (Paul Donaldson) talked to me about having a go with him and that’s how he ended up in my kennel,” Deverell said.

“The dog has come on in leaps and bounds these past few months and his record speaks for itself,” he said.

Awesome Naz (Collision-Brami’s First) has had 18 starts for eight winds and six minor placings for $21,000 in stakes that includes his latest haul.

Deverell said the dog is well performed on all three tracks but he is likely to focus on Hobart in the coming weeks as Awesome Naz can still tackle a grade five on that track while he is a grade three dog ain Devonport and he has won his way into grade two company in Launceston.

Deverell has a dozen in work at in his kennels at Penguin on the North-West Coast and amongst his racing dogs is Jethro that shows enormous potential.

“Jethro is the fastest dog I have ever trained and that’s saying something because Big Moose was very quick but this one is superior as far as natural speed is concerned.”

“I have some big plans for Jethro down the track but at 19 months old he has the world at his feet.”

“If everything goes as we hope then he could be a real star next year,” Deverell said. Click here