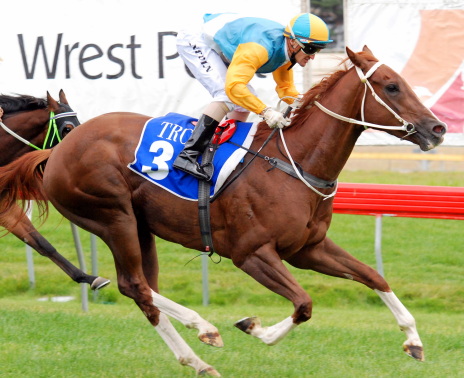 A SIX-MONTH layoff gave Longford-based jockey James Nevin time to assess his riding career and only two months into this latest chapter of his life he is riding the crest of a wave.

Nevin snared a treble at The TOTE Racing Centre in Launceston on Sunday which can only enhance his chances of securing plum rides for the remainder of the season.

He partnered Free Shout and Farasi to victory for trainer Michael Voss and he rode the Bill Ryan-trained three-year-old Final Verdict to a stirring win in a maiden over 1400 metres.

During Nevin’s most recent break from riding due to an ever increasing weight problem he discovered a diet and a focus that has changed his life.

His weight blew out to 69 kilograms but a diet of fish, fruit and porridge saw that tumble to 57kg in the space of a fortnight, with regular exercise and riding trackwork ensuring his weight remains constant at around that mark.

“The break gave me time to assess a lot of things in my life including where I wanted to be in five years time so my focus has been on what’s best for me and so far everything has worked out well,” Nevin said.

“I still have the odd bad week when the discipline is hard to keep in check, which was the case the week leading up to last Sunday’s meeting.”

“But I rode a treble so all that hard work is rewarded the best way possible and it immediately puts you in a great place mentally,”

“There’s nothing better than getting rewarded for how hard you have worked and getting winners is the only way any jockey who has to work on his or her weight can be fully satisfied.”

“It will always be hard work to keep my weight in check but the way I manage it mentally this time around gives me a better chance of getting through the tough times,” he said.

Nevin, 27, spent four years in the army that included stints inAfghanistanandEast Timorand it was his time with the Australian forces that helped him find his way back to race riding.

“I’ve definitely been in a better frame of mind this time around and that has a lot to do with my time in the Army.”

“I grew more as a person while in the army and I came out of it having a greater understanding of who I was and what I wanted out of life and that’s probably the greatest impact army life had on me.”

“I will always have to work hard at keeping my weight in check.”

“As for how long I can keep doing it, only time will tell but while I keep telling myself how much I need this (riding) in my life I’ll continue to be a jockey,” he said.

Nevin, who is a former top apprentice who spent two years riding for Aquanita Stables in Melbourne, had five rides locked in for this Sunday’s meeting at Elwick before the nominations were released in Monday.

“I am more switched on this time around and the introduction of ratings and benchmark racing also makes life easier in terms of knowing what weight a horse will get.”

“There also is no doubt that when you are riding winners people want to put you on, so it’s just a matter of trying to get on the better horses when you’re getting winners that can help keep you in the spotlight,” he said.