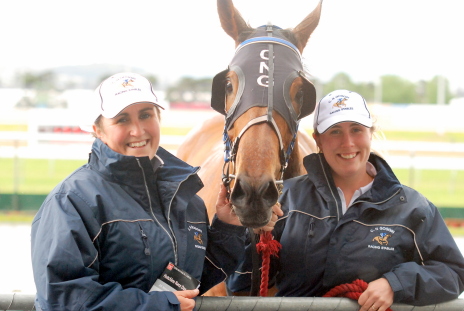 LUELLA MEABURN was destined to embark on a thoroughbred training career having spent the past two decades working for her father, multiple premiership-winning trainer Charlie Goggin.

Early this month Luella teamed up with her father to form a training partnership, something that has become very popular around Australia in recent years.

Father and son combination of David and Scott Brunton have been very successful winning last season’s Tasmanian training premiership with over 80 wins and they are favourite to make it back-to-back titles this season.

At Tattersall’s Park in Hobart last Sunday Luella and Charlie celebrated their first winner as a registered partnership when their promising three-year-old filly Faith’n’courage scored an impressive maiden win.

But it quickly turned into a double celebration when their lightly raced five-year-old Musique Player delivered an authoritative win in the Midford Maiden/Class One Handicap over 1600 metres.

Faith’n’courage had shown potential at her first couple of outings as a two-year-old and her maiden win followed an encouraging first-up second to Huon Knight.

Musique Player has shown good enough form this time in to suggest he will develop into a handy stayer and deserved to break through after four consecutive seconds.

Listen to what co-trainer Luella Meaburn had to say about Musique Player and their first double .