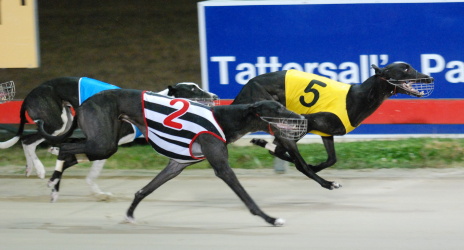 NEW RECRUIT continued his domination of feature race wins when he powered home to take out the Betfair Easter Cup over 461 metres at Tattersall’s Park in Hobart last Thursday night.

The Mick Stringer-trained dog won a heat and the final of the Reg and Aileen Ivory Memorial Classic last month prior to tackling the Easter Cup series.

He had to settle for a minor placing behind November Digger in his Easter Cup heat but Stringer had him at his top for the final and he delivered the gods.

New Recruit (Paddy’s Flame-Miss Bardie) is owned by Karlene Cuthbertson and Sally-Anne Wilson who have probably won more feature races in the past 18 months than any other owners in the state.

New Recruit has been in top form with tis his third win in the space of four outings.

It was his fifth win on the Hobart U-bend rack from 10 tries but his overall record is more impressive with 14 wins and five minor placings from 26 Tasmanian starts.

Stringer will most likely aim the dog at the Illingworth Classic in Launceston next month.

While New Recruit was a deserving winner, there was a lot to like about the run of Decembrist that was last at he top turn but he rattled home at the rate of knots to go down by only a neck and he was three lengths clear in the catching pen.

Lika Whisper ran another honest race but he is likely to have a short break.