Newcomer a part of PB for Gittus 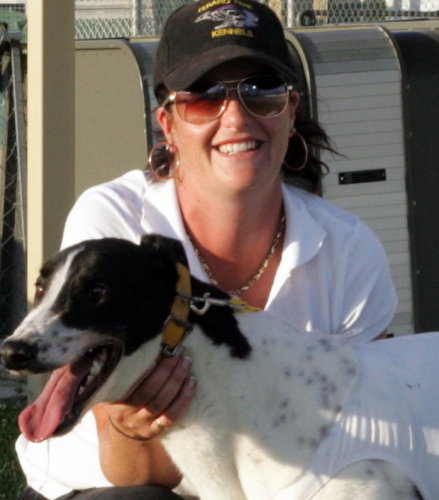 BRIGHTON trainer Susan Gittus has been rebuilding the team in her kennel and one of the latest arrivals Tahiti could become one of the stars.

Tahiti, a well bred bitch by Collide from Beachley and part-owned by Tony Lockett, made an impact in Hobart last night when she powered her way to an impressive win in a grade five event over 461 metres.

It was only her second start in the state but one that signalled she may have a bright future.

Tahiti began fairly from box one while the favourite Pure Tiger flew the lids from box three to lead but with the aid of the inside alley Tahiti booted through to hold the lead to the first turn.

She slipped four lengths clear and held on to defeat Pure Tiger by a length with Will Do Well over three lengths astern.

While Tahiti was getting tired on the line, the bitch should benefit from the run and can only improve.

She is wel bred as her mum, Beachley, is a full sister to star sprinter Slater.

Another recent arrival at Gittus’ kennel is Star Jones that also showed enough last night to suggest she can bag a few wins in Tasmania.

Star Jones lined up in a strong grade four event over 461 metres and she made every post a winner.

Serena Bee gave Gittus a treble when she scored impressively in a grade four event over 461 metres.

Gittus is no stranger to training trebles but when Rotation got up in the last stride as the second reserve in the final race on the 10-event card it gave the talented trainer four winners for the night, which was a personal best.

“I’ve had a few trebles and a second at the same meeting so it’s great to finally get four.

“I’ve got a nice group of young ones in the kennel and while there’s no superstars amongst them, quite a few are capable of winnng a lot of races,” she said.

Given the strength of Gittus’ kennel four winners a meeting could become more common in the coming months.