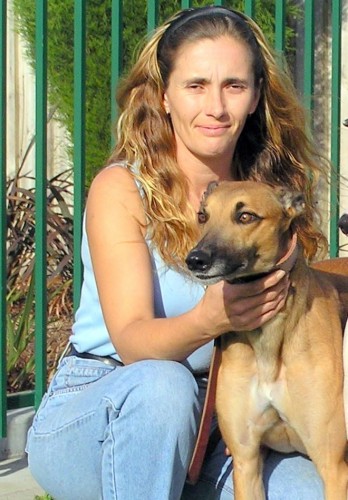 THE arrival of two litter siblings from Victoria has sparked life into the kennel of talented Moonah trainer Loretta Luttrell.

I’m Bronte’s and Lovely Banks Lad (Where’s Pedro-Jazzy’s Girl) arrived at Luttrell’s kennel in late September and both have won their juvenile on the Hobart circuit.

Lovely banks Lad won at his first outing for Luttrell, scoring impressively in a juvenile in Hobart in mid October.

Last Thursday night in Hobart I’m Bronte’s clinched his maiden at his fifth start for the new kennel.

I’m Bronte’s made the most of his inside draw (2) and once on the lure he sped clear and went on to defeat Crashin’ Koby by over two lengths with Brindle Bad Boy third.

It was a deserving win for I’m Bronte’s as he had run second at his previous four starts in Tasmania.

“He certainly deserved this win because he has been second every other start he’s had for me,” Luttrell said.

“His litter brother (Lovely Banks Lad) made a great start by winning at his first start in Tassie but his form has waned a bit.”

“But I’m Bronte’s has been consistent from day one and he should be able to win his juvenile at all three tracks,” she said.

The litter brothers were bred in Victoria by their owners Brett and Kelly Bravo who reside at Lovely Banks, which is a northern suburb of Geelong.

“The Bravo’s sent me the dogs with the intention of putting them through Tasmania’s juvenile system and so far things have worked out well,” Luttrell said.

“Lovely Banks Lad was impressive on debut but he may have lost his way a bit so we’ll freshen him up and just stay clear of Launceston with him.”

“I’m Bronte should have no worries in winning his juvenile on all tracks and he’ll probably achieve his goal and win his grade fives as well.”

“The plan has always been for me to try and get the dogs progressed as far as they can go here and then head them back to Victoria.”

Luttrell has only four dogs in work with Koronga Gem and Special Kiwi her other two kennel tenants.

Her husband Craig prepares two – recent winner Flying Uno and Makari Girl, both of which are owned in Victoria by Warren Williams and Michael Geyer.