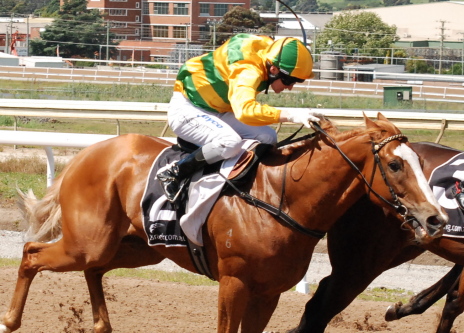 STAR Tasmanian-born jockey Craig Newitt was back in the state last week to test the Devonport Racing Club’s new Tapeta synthetic surface and the talented rider gave the track a glowing report.

Newitt, who is regarded by most as one of the nation’s best jockeys, had a full book on the nine-event card and while he couldn’t snare a winner he still praised the surface.

“After riding a day on this track it’s easy to see why they wanted to change from the grass to this synthetic surface,” Newitt said.

“It seems horses can come from any position to win as was the case on my first meeting on it.”

Newitt compared the Tapeta track to the synthetic surface at Geelong (Victoria) that was subjected to some criticism when it was first installed.

This track has a different type of base to Geelong but it is a little bit like that track in that the more rain it has the former it gets.”

“When it cops rain it compacts and that causes it to get firmer, although this track is probably a bit more flexible,” he said.

Newitt said the track will need to be raced in before making any substantial judgment on its durability.

“If it is like Geelong we won’t know for at least six months how versatile this track is but the way this surface races after only a handful of meetings it’s fair to say it will be the savoir of racing during the winter months in Tasmania,” he said.