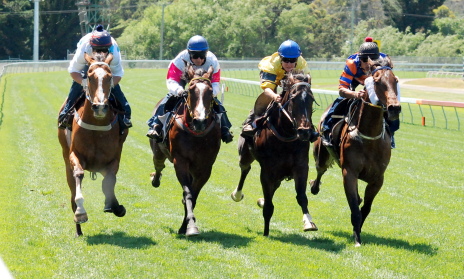 CONSISTENT five-year-old gelding Mr Fashion gets his chance to prove his worth as a star sprinter when he takes on a hot field in the $90,000 Country Club Tasmania Newmarket Handicap over 1200 metres at The TOTE Racing Centre in Launceston tonight.

Mr Fashion emerged as a serious contender when he scored a narrow but impressive win in an open handicap in Launceston at the end of last month.

The Leon Laskey-trained galloper is unbeaten from his only two starts this campaign and he also was successful in a trial in Launceston two weeks ago.

“The horse is in great shape and I couldn’t have him in better order for the race,” Laskey said.

“Everything has gone perfectly for him this [reparation and the trial he had two weeks ago really topped him off for this race.”

Mr Fashion will be ridden by Victorian-based former Tasmanian jockey Luke Currie who makes infrequent visits to the state these days.

“We’ve been able to secure a good jockey who is a strong rider and that’s just what this horse needs if he is going to win a Newmarket,” Laskey said.

Mr Fashion gets into the race on the minimum weight of 54kg but as it is a quality handicap the maximum weight is only 60kg which gives more experienced and in-form horses an edge.

“My horse has never been tested against the likes of what he meets tonight so I’m just hoping he is up to it.”

“He gets a weight advantage on some of the horses that have performed well at this level in the past but that isn’t enough to win.”

“He is going to need luck in running because he will need to be in a position to unleash that good turn of foot that has seen him win races this time in.”

“If he gets that dream run then I’m confident he’ll be there when it counts,” he said.

Last year’s winner Obstinado is one of five contenders from the powerful David and Scott Brunton stable and if the little pocket dynamo wins again he will be given a standing ovation.

Obstinado, or “Stan” as he is affectionately known around the stable, is one of the most courageous gallopers to step foot on a track in Tasmania in years.

His never say die attitude has carried him to victory eight times from only 25 starts and he meets Mr Fashion two kilograms better than when they met last time and beaten only a head.

The Bruntons also will saddle up Life To The Full that is resuming from injury and if he was able to produce his best first-up form he would be the one to beat.

Another of their runners is Lightly Spiced, a former South Australian galloper that placed twice at his first two starts in the state back in May-June.

His first-up run in Hobart was better than it looks on paper because he was trapped wide and on the worst part of the track when eighth of 14 but beaten only 3.4 lengths.

Faye Commands has been a good money-spinner for the stable and she has a brilliant first-up record that brings her into calculations.

Her form when last in work was excellent but she has yet to win in open company and this is clearly her toughest assignment.

The stable’s best chance is Punctuate that started favourite in the Goodwood Handicap in Hobart won by dash For Magic.

Punctuate has won five times from seven starts in Tasmania and while he was unsuccessful fro four outings interstate last campaign there were excuses.

Connections are confident Punctuate can lead this quality field and if his rider, Victorian apprentice Jordan Mallyon, can get him to settle and be saved for his signature “kick” at the top of the straight he will be the one to beat.

Chances must also be given to Socks, Motspur, Western Wager, Silver Bullion and Goodwood Handicap winner dash For Magic.