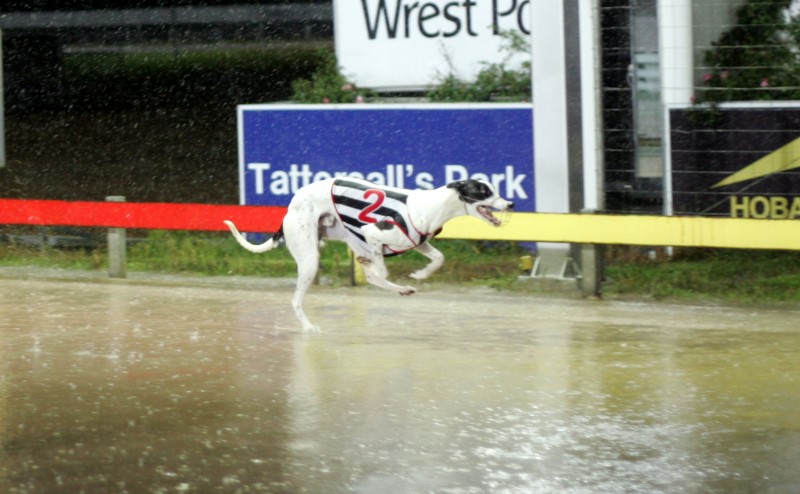 THE meeting at Tattersall’s Park in Hobart last night was full of action but it wasn’t all on the race track.,

Torrential rain overshadowed the thunder and lightning but added to the drama was a lighting failure and a lure breakdown.

But the problems were rectified and the meeting proceeded with a late finish the only legacy.

The Easter Cup heats were run in torrential rain but both winners were impressive in atrocious conditions.

Nicholas Jack was going for four wins in succession but despite his impeccable form he started at the unbelievable price of $3.90.

The son of Made To Size never gave his backers any cause for alarm as he powered home to score by over six lengths from Tiza Gold with Dealer’s Lad a close-up third, just inn advance of Everywhere.

The Ted Medhurst-trained two-year-old dog has an imposing record in Tasmania since arriving from South Australia last month.

This was his fifth win from six starts in the state and his time of 25.94 on what was clearly a slow track was outstanding.

Nicholas Jack would only need to bring that form to the races on final night to be very hard to be5at.

The Rod Bragg-trained Left Seattle made the most of the outside box (8) to miss trouble at the top turn and that paved the way for a comfortable victory in his Easter Cup heat.

Left Seattle darted back to the fence on the home turn and raced clear to defeat the fast-finishing MartelloTowers and race leader Franklin Boy with Select Breaker making it into the final with a fast-finishing fourth.

Left Seattle clocked a personal best of 26.20 but it was a far cry from the run of Nicholas Jack.