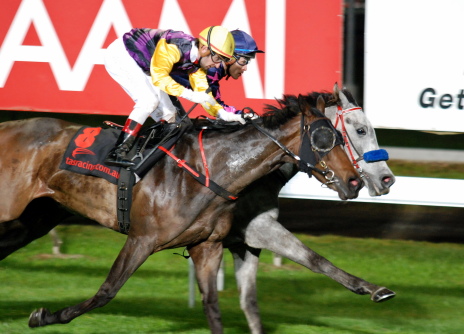 A SWITCH from Thursday to Wednesday nights for thoroughbred racing in Launceston as from next month should pave the way for greater exposure of the product within Australia and overseas.

When night racing debuted in April last year there were many industry participants critical of the timeslot that restricted coverage to Sky 2 and offered only spasmodic coverage on Sky World that is the designated thoroughbred channel that delivers to the domestic market (lounge rooms around Australia).

The industry wanted the product delivered on Sky1, the broadcaster’s premium channel that beams into all TAB and TOTE outlets around the nations and is considered the vehicle on which to drive maximum turnover.

Lengthy negotiations between Tasracing and Sky Channel, in consultation with the Tasmanian Turf Club, led to the change being realised.

All Tasmanian night thoroughbred meetings from November will be broadcast on Sky1 and most meetings will include Sky World coverage that will consist of live pre-and post race interviews with trainers, jockeys and owners as well as a late mail service and on course fluctuations in betting..

With the switch also comes change to the structure of the northern leg of the Tasmanian Summer Racing Carnival that originally scheduled its feature race dates on Sunday afternoons leading up to the Launceston Cup that maintains its traditional Wednesday afternoon timeslot.

The Tasmanian Turf Club’s first night meeting of the carnival is on February 1 and boasts the $90,000 weight-for-age thetote.com.au Stakes and $30,000 Thousand Guineas for 3YO fillies on what should be a strong eight-event card.

The Tasmania Racing Club hosts the next two meetings of the carnival at Tattersall’s Park in Hobart with the Derby meeting on February 5 and the $225,000 AAMI Hobart Cup the following Sunday.

Mowbray hosts the remaining three meetings of the carnival with the $100,000 Vamos Stakes and three Magic Millions’ Classic each worth $50,000 the features on February 15 and the following Wednesday night boasts the weight-for-age $100,000 George Adams Plate, $100,000 Gold Sovereign for two-year-olds and the $100,000 Tasmanian Oaks.

The carnival concludes the following Wednesday afternoon (February 29) with the Launceston Cup meeting.

Next year’s Tasmanian Magic Millions Yearling Sale will be held at the Inveresk Showground in Launceston on February 21 instead of the day before the Launceston Cup, which has been the case since the sale’s inception.

The social events on the three days (Sunday, Monday and Tuesday) leading up to the Launceston Cup are not expected to alter from this year’s format.