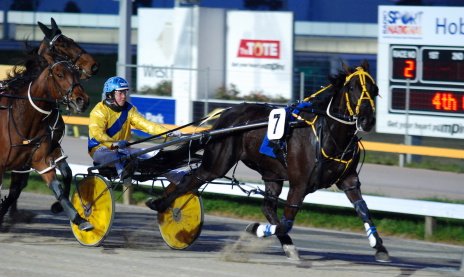 SMART pacer Nitro Blue will head to the spelling paddock on a high after the gelding notched his fifth win in succession in a 3C0-3C1 over 2090 metres at Tattersall’s Park in Hobart on Sunday night.

Nitro Bluer will take the well-earned break and return to racing around Christmas for a tilt at most of the feature three-year-old races later in the season.

It was another stroll in the park for the Juanita McKenzie-trained gelding.

Talented teenage reinsman Alex Ashwood had no hesitation in allowing his charge to face the breeze outside of the leader Metro Master and when Ashwood gave Nitro Blue more rein he surged to the lead and wasn’t fully extended to defeat Cleora by 1-1/2 metres with Hesione over two metres astern.

Nitro Blue has come a long way since his first two-year-old win in Launceston in April. At his six subsequent outings he won five and was placed second at his only other outing but that was behind Driller Mac in Hobart when beaten in a photo finish and the winner clocked a mile rate of 1m.59.7s.

Nitro Blue won his next start in Launceston and clocked the exact same mile rate over 1680m.

McKenzie has a hectic schedule, balancing a life as a working mother of three children with training a small team of up to six.

Listen to what trainer Juanita McKenzie had to say about Nitro Blue – click here.