No gloom for this doom 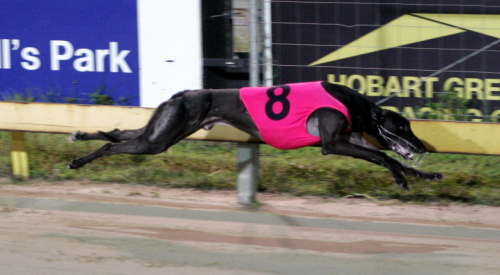 LIGHTLY raced pup Bank On Doom lived up to his Easter Purse heat form by blitzing his rivals in the final at Tattersall’s Park in Hobart tonight (Thursday).

The Glenn Joyce-trained dog, by Bank Manager from the Go Wild Teddy bitch Go Wild Amy, began like a shot from box eight to establish a three-length lead at the top turn from Jeannie’s Gift and Demetria while the well-backed Primitive Cool (7) was caught in traffic and being bumped on both sides back in the ruck.

Bank Manager extended his lead in the home straight and hit the line almost five lengths clear of Jeannie’s Gift with the reserve Eifella Jack running home well to grab third ahead of the tiring Demetria.

Bank Manager was having only his fourth start but his time of 26.26 for the 461 metre trip would suggest his win ratio will remain impressive in the coming weeks.

Jeannie’s Gift stuck to her guns at the business end of the race and Eifella Jack ran on from well back in the field at the home turn.

Demetria looked set to hold third half-way up the straight but she wilted and obviously lacks the stamina of her litter brothers of which one is superstar Damek.