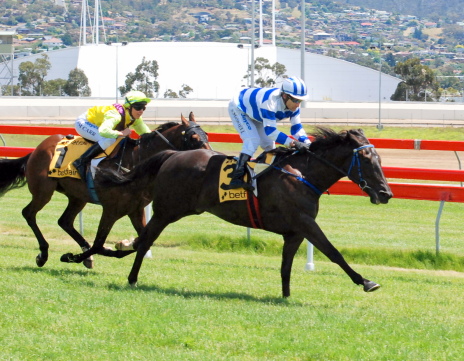 No Go Zone was expected to be a late maturer and probably not show up until his races were over 1600 metres or more but the gelding has surprised connections at is first two starts.

No Go Zone ran second on debut in Hobart three weeks ago and today he went one better by scoring at impressive win in the Boags Draught 3YO &Upwards Maiden Plate over 1000 metres.

The Charlie Goggin & Luella Meaburn-trained gelding is by Clangalang from Nought, a Danzero mare that was bred and raced by the Goggin family.

Being by Clangalang he was not expected to race at two and that prediction was realised but few expected him to be proficient over 1000 metres.

But when an opportunity arose Maskiell steered his charge right and set sail after the leader Flying Jim Bob and collared the leader close to home.

Listen to what co-trainer Luella Meaburn had to say about No Go Zone after the race – click on the audio file below.