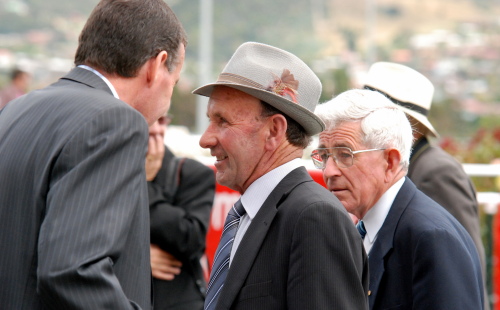 BROADMARSH trainer is adamant his lightly raced stayer Norsqui will measure up when he eventually takes the gelding to Victoria for a series of distance races this autumn.

Norsqui gave his rivals a galloping lesson when he strolled to an effortless 3-1/2 length win over Clan McLeod and True Vision in the Southern Cross Plate (C1) over 2100 metres on a track rated a Dead 4.

“The plan was to see if he could win two or three races in quick succession here in Tasmania and then look at taking him across the water,” McShane said.

“He’s almost done that so if we can pick up another win in the very near future we’ll have a look at what’s available for him in Melbourne,” he said.

Norsqui showed good early speed and when the pace slackened, rider Darren Gauci gave his charge more rein and he quickly sped around the leaders to take up the running.

At the top of the straight Gauci called on Norsqui to dig deep and there was plenty in the tank.

Norsqui was the first leg of a winning double for McShane and his sire Matsqui when Matsangel scored impressively in Furniture City Handicap (C1) over 1200 metres.

Matsangel, also ridden by Gauci, led and showed his rivals a clean pair of heels to the home turn and when Gauci summoned the gelding for the supreme effort he booted well clear and went on to defeat Golden Needles by three lengths with Rebel Bride a game third over two lengths astern.

Gauci finished with a treble when the Charlie Goggin-trained Starsimp rattled home from well back to win the Black Stallion Hotel Handicap (C2) over 1400 metres.