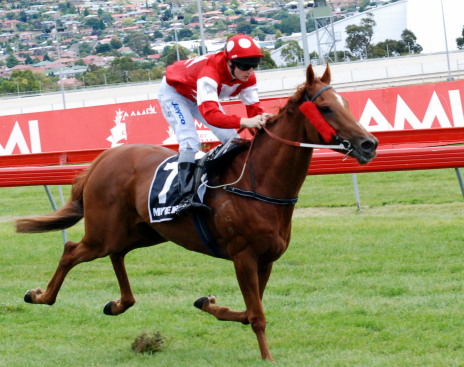 BROADMARSH trainer Walter McShane will target a 300-metre race at Moonee Valley with his home-bred gelding Norsqui following his impressive win in a maiden/class one over 2100 metres at Tattersall’s Park yesterday.

Norsqui trailed the leader before moving to race outside the leader where he stayed until the 500-metre-peg.

Rider Craig Newitt called on the son of Matsqui at the top of the straight for the supreme effort and he forged clear to go on and score by over three lengths from Mainbrace with True Vision just under a length away third.

McShane said the horse had loads of staying potential.

“The further the distance the better this horse will like it and that’s why we are looking at taking him to Melbourne for a 3000-metree race at Moonee Valley in the near future,” McShane said.

It was an overdue win for the gelding that has only been to the races 12 times in three preparations.

“This horse has been a bit unlucky in a few races but this time with Newitt aboard he had the run of the race and was ridden to instructions and we’ve got the result,” the trainer said.

Newitt was full of praise for the gelding.

“I reckon he would have gone at the same bat for another lap he’s just a dead-set stayer,” he said.

The minor placegetters worked home nicely and they both should be picking up a race in the near future.