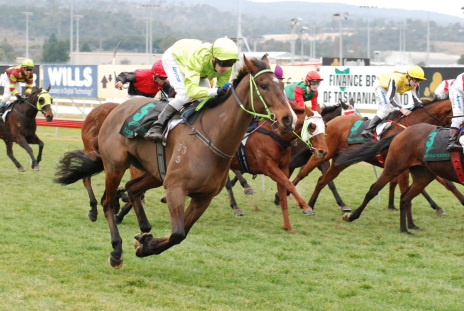 TALENTED five-year-old gelding North Lodge looks set to embark on another interstate campaign following his impressive win in a benchmark 68 race over 1620 metres at the TOTE Racing Centre at Mowbray last Sunday.

North Lodge ($14.30) produced a powerful finish coming from worse than midfield nearing the home turn to win by almost a length from Uboa and Mr Isaac.

It was only his third career win but arguably his best, although it was a surprise for connections who were apprehensive about his winning chances owing to the meeting being transferred from Elwick to Mowbray.

The Michael Voss-trained gelding had success interstate last season and the trainer is confident the son of Festival Hall can repeat the dose.

“We weren’t sure he would handle the Mowbray track because the last time he raced here he was disappointing but it may have been a touch drier this time and he finished the race off well,” Voss said.

“He is a horse that looks after himself a bit so the conditions usually have to be in his favour.”

“His track work during the week leading up to the race was exceptional so we thought he could win if he handled the track,” he said.

North Lodge had a shaky start to his racing career with his habit of pulling fiercely in his races giving his former trainer and part-owner Chris Crook some sleepless nights.

But early last preparation jockey Eddie Brennen put in a lot of hours on the training track trying to teach him to settle and it paid dividends.

Crook took the horse to Victoria last September where he had four starts on provincial tracks for a win over 2100m at Ballarat and a second at his subsequent outing before finishing near last at Seymour after which he was brought back to Tasmania for a spell.

“Chris (Crook) has always been confident he will stay and the horse gives me that impression too,” Voss said.

“I’d like to give him one more run over 2100 metres here in Tassie before we head across the water.”

“There’s a benchmark 78 race over 2100 in Hobart on Sunday week so we’ll probably head there and take him to Melbourne soon after,” he said.