Nothing better than a Friday Lunch 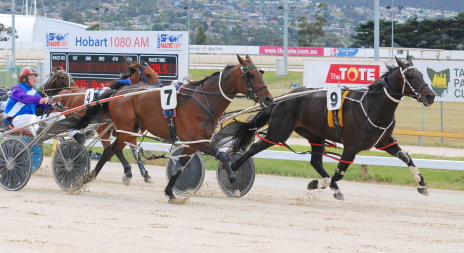 FORMER Victorian pacer Friday Lunch made an impressive Tasmanian debut at Tattersall’s Park in Hobart tonight with a win in a heat of the Eric Reece Memorial over 2090 metres.

Friday Lunch faced the breeze for much of the past 12100 metres but made light of the task to emerge triumphant by a head from Prettyboytoby with Shakes Gold over four metres away third.

The gelded son of Dieberspace-Teretifolia clocked a mile rate of 2m.02.86s and he ran home his last halof (800m) in a slick 59 seconds and he did so without having been to the trials.

The Grant Hodges-trained five-year-old gelding had modest form in Victoria but with Tasmania’s drop-back rule in place he was able to sneak into the Reece series for C0 performers four-year-old and older.

Hodges was delighted with the gelding’s effort and predicted a bright future for the horse in Tasmania.

The second Reece heat was taken out by Delmont Rose that produced a powerful finish from well back in the field at the bell to score from Packedtotherafters and the heavily backed Laterron that was resuming from a nine-month spell for the David Wesley stable.

There was plenty of action in the second heat with Trump Lady almost falling after the finish line courtesy of interference from one that galloped close to home.