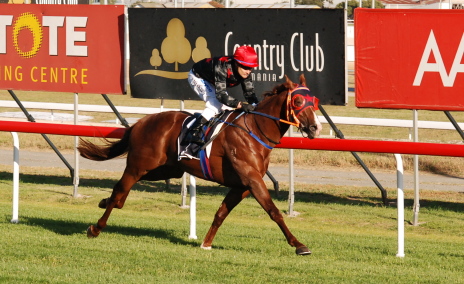 SPREYTON trainer Darryl Horner hasn’t spent a lot of time in the winner’s circle of late but he’s hoping one of his promising three-year-old fillies, Novaell, can turn that around in the opening race on the eight-event card at he TOTE Racing Centre in Launceston tonight.

The filly will go around in the SuperVobis 3YO Maiden over 1220 metres and on exposed form she looms as he one to beat.

Novaell debuted with a second on her home track and at her subsequent start she was a victim of circumstances when caught wide throughout from a very wide barrier draw.

Novaell (God’s Own-Novarosa) has only been to the races three times for the two seconds and one unplaced effort with her latest being a second to the highly promising Bel Ombre that steps out in a class one on tonight’s program.

Tonight she will be partnered by multiple premiership-winning jockey Brendon McCoull who has a great book of rides.

Horner is confident Novaell can discard her maiden status as he has the filly in great order for the assignment.

The trainer also has first-starter Kinnabella engaged in the race and while her trial form is only modes he expects the filly that was bred by Darley, to be very competitive.

Listen to what trainer Daryl Horner had to say about Novaell’s chances in race one in Launceston tonight – click here.