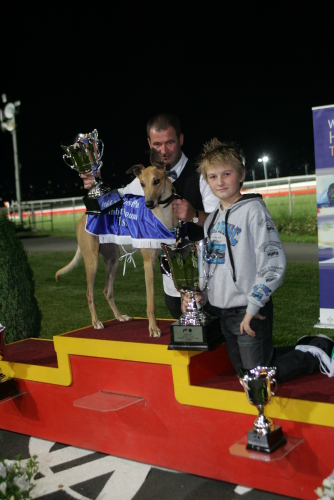 TOP Victorian trainer Darren McDonald has been trying for over a decade to win a Wrest Point Hobart Thousand and at Tattersall’s Park on Thursday night Octane Show broke the hoodoo.

McDonald was represented in the final by Octane Show and Perfect Fancy and both figured in the finish with Perfect fancy snaring third spot.

“Winning this race means a hell of a lot to me because I’ve been here many times and with some real smart dogs but the prize has eluded me,” McDonald said.

The astute trainer has had some class acts represent him in the Thousand final including his best dog Brett Lee that had to play bridesmaid to Top Shiraz in 2000 when the race was held at the old Royal Showground circuit.

“A lot of time and effort goes into the planning of these races and for whatever reason things just haven’t worked out for us in the past but this time we did a few things different and it paid off.”

“In the past we’ve taken the dogs home after the heats and brought them back but we’ve had problems with plane delays and other things have gone wrong but leaving the dogs here has been much better so we’ve learned something there.”

“It’s just wonderful to finally win it and with a dog that was a very deserving winner.”

“Octane Show is probably entering the twilight of his career but he’s in terrific form and he had to be to win this race because it was probably the hottest Hobart Thousand field I’ve seen since I’ve been coming here,” he said.

Octane Show began brilliantly from box six and after a stoush with kennel mate Perfect Fancy (2) and Numero Uno Bale (1) the powerful son of Pure Octane drove to the front and broke clear.

Damek struck interference when squeezed up nearing the 340-metre boxes, spat out the back and never recovered.

Lee Winter (7) made a charge but he wasn’t up to the task and only battled on to finish fourth.

Octane Show went on to score by over two lengths from Numero Uno Bale with Perfect Fancy third with the winner clocking 25.83 over ther 461-metre trip.

Octane Assassin was the first of the three Tasmanian dogs home, finishing hard along the rails after settling last early.