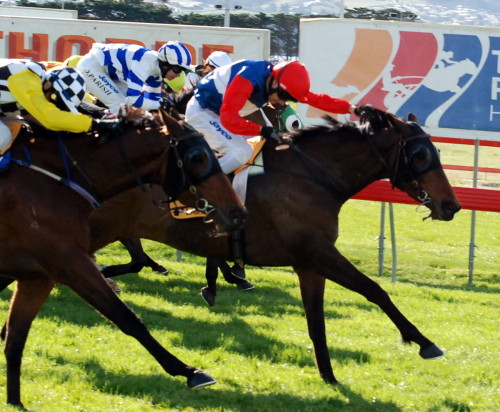 Race results recorded during October have given Tasmania’s Magic Millions Yearling sale a major promotional boost leading up to the 2011 sale.

The sale scheduled for Launceston on Tuesday 22 February features a host of entries that are a full and half-relations to some of October’s stand out performers.

One of the leading entries is a full brother to the outstanding mare Lady Lynette (Ladoni). Lady Lynette made it back-to-back Group 3 Tesio Stakes on Cox Plate Day. Lady Lynette will tackle the Group 2 Matriarch stakes (2000m) on Saturday, a race she finished 3rd in last year. Lady Lynette was a $13,000 purchase at the 2006 Tasmanian sale from the Armidale Stud draft.

This year’s Listed Bendigo Cup was won by Tasmania’s leading stayer Dream Pedlar (West Quest). Dream Pedlar was placed in both of last year’s Hobart and Launceston Cups, and his trainer Troy Blacker decided to give Dream Pedlar an interstate campaign to prepare him for his 2011 Tasmanian Cups campaign.

Dream Pedlar’s lead up form had been very good with a win in the $50,000 Ballarat Gold Nugget, followed by a 4th placing in the Group 3 David Jones Cup at Caulfield.

Like Dream Pedlar, Dream Flyer has taken time to mature and he is also showing similar staying traits to his older brother. Both Dream Pedlar and Dream Flyer are out of the good producing mare Unamah, and she has a Ladoni colt entered for the 2011 sale.

The first 2yo race in Tasmania was conducted at Hobart on 24 October, and it was won in extremely impressive fashion by the Ken Keys’ trained Triple Asset (Nadeem) a $28,000 purchase from the 2010 Sale.

The Armidale Stud-bred filly is sure to provide her owners with a lot of enjoyment in the early 2yo races and she will also be aimed at the $50,000 Magic Millions 2yo race on Launceston Cup Day.

The owners of Triple Asset also picked up a $6,000 Tasbreeders sales credit for the 2011 sale.

The win for Triple Asset was a great boost for the Tasmanian sale, proving Tasmanian vendors can also breed early 2yo runners. Triple Asset is out of Caralowe, and she is represented by a stunning Churchill Downs filly at the 2011 sale.

In total, 36 races were held in Tasmania during October, with 20 of these winners being Tasmanian-bred.

A dozen of the winners were previous graduates of the Tasmania Sale – representing a 33% strike rate.

While the 33% strike rate for the sale is an extremely impressive figure, it is even more impressive when you consider the calibre of these winners.

Over and above the outstanding performances listed above, several more above average gallopers have now emerged including Rocky Times (Ladoni) and Our Super (Tough Speed) along with proven top class gallopers Secdolrue (Dolphin Street) and Western Wager (West Quest).

Secdolrue and Western Wager are well above average, however injuries have stymied their careers.

Fortunately they are firing again with better races awaiting these horses during the rich Spring and Summer Carnivals and no doubt the Newmarket Handicap later this month is on their agendas.

Full details of Tasmanian Yearling sale graduate winners during October are listed below: