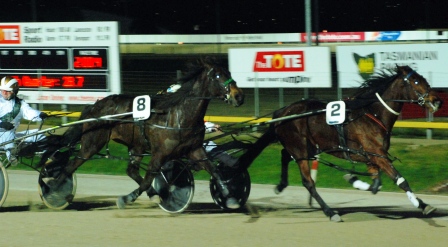 The Christian Salter-trained Ogrady capped a great season with his selection as Tasmania’s 2YO Colt or Gelding of the Year.

Ogrady (x Grinfromeartoear) is owned by Noel and Marlene Salter who bred him from one of their top broodmares Allsoroise with the two-year-old trained by their son Christian Salter.

While Ogrady was a unanimous selection, the Rohan Hillier-trained Thirsty Mach was voted second. He was unbeaten from two starts but a leg injury forced him off the scene after his brilliant win in the Golden Slipper in which he won in race record time (1.58.6).

Ashkalini started eight times for three wins, two placings for $32,807 in stakes. With her best win being in the $30,000 Evicus Stakes.

Ashkalini is owned by the Rattray Family Trust and was trained by Barrie Rattray.

The filly showed above average ability from day one and if she comes back as expected she could be one of the sate’s best three-year-olds.

Final points were Ashkalini 28 followed by Artifice and Maggie Kennedy with 21.