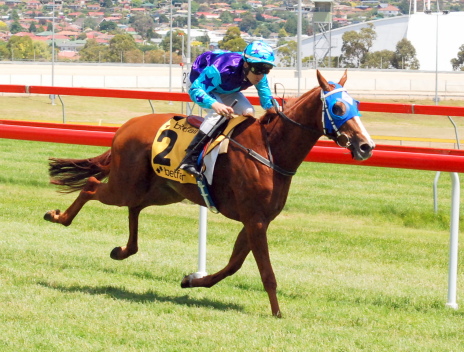 PROMISING three-year-old gelding Ollie’s Gold will be given the chance to play with the big boys and girls in the Tasmanian Guineas after his impressive maiden win in Hobart last Saturday.

Ollie’s Gold (Jason Maskiell) led all the way to score impressively after collecting three successive second placings, of which one was in July in a 2YO and the next back in August in a 3YO Maiden on a heavy track.

The gelding has always shown promise and trainer Gary White believes he deserves the chance to test his ability against the three-year-olds that have already proven to be competitive in feature races.

“I’ve always believed this horse would be competitive at the top level in his age group but it has taken him a while to come to terms with racing,” White said.

Ollie’s Gold resumed with a second to Staples Gee Gee in Launceston three weeks ago which was his first start for four months.

At this latest outing he showed his customary early brilliance and with a strong rider aboard he showed strength at the business end of the race to go on and defeat first-starter Cuprona Road by two lengths with Philanthropy about 1-1/2 lengths away third.