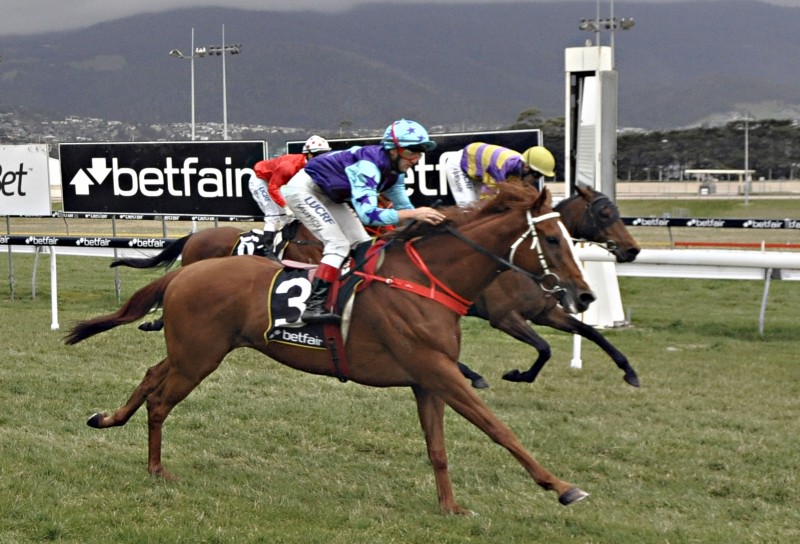 FORMER Tasmanian Derby winner Ollie’s Gold will be aimed at the $100,000 Devonport Cup on January 7 following his courageous win in a benchmark 72 race over 1550 metres at Tattersall’s Park in Hobart last Sunday.

It was the Gary White-trained gelding’s first win since leading throughout to take out the 2013 Tasmanian Derby which was his third career victory.

Immaturity played a part in his inability to win after the Derby triumph but it seems he has put this imperfections behind him.

At this latest outing he settled just off the speed and while he was taken wide in the home straight by rider Bulent Muhcu the Promontory Gold gelding was still able to stave off Player One and Hugo over the concluding stages to score by a half-length.

White was delighted with the win and confirmed plans to head him to the Devonport Cup.

“On his trackwork I was confident he would be very hard to beat and that’s how it panned out,” White said.

“He will now head to the Sheffield Cup (1880m) at Devonport on Boxing Day and hopefully he will then press on to the Devonport Cup.”

“The Sheffield Cup should give us an indication as to whether or not we go to the Devonport Cup but the Hobart and Launceston Cups are the natural progressions,” White said.

“During this horse’s racing career he has done many things wrong in his races and that’s the main reason why we opted to get him to lead because he was stable racing against  the rail.”

“But all that is behind him now and It will be onwards and upwards as we head to the cups,” he said.

When asked if the horse is exactly where he needs to be at this stage of his preparation White replied. “he is ahead of where I want him to be which is why I’ve given him a few days off after this latest run but overall the horse is in great shape and I couldn’t be happier.”