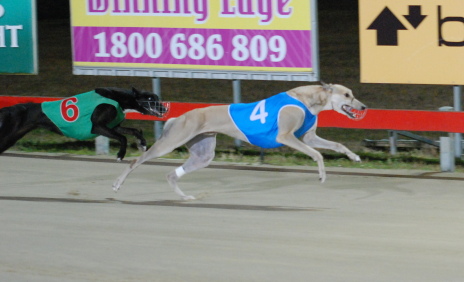 LEADING greyhound trainer Ted Medhurst celebrated his 80th winner for the season when his promising bitch Olwyn scored an effortless victory in the division two final of the J G Nelson Cup over 515 metres in Launceston on Monday night.

Olwyn had to contend with wearing the yellow vest but she made light work of the task by beginning well and had the field on her heels as she hugged the rail at the first turn.

Once on the bunny she sped clear and maintained a three-length margin over Night Train that tried hard throughout with Hellyeah Sam almost a length away third.

It was Olwyn’s third win from as many outings on the Launceston circuit for what was only her fourth start since arriving from Victoria last month.

The Bombastic Shiraz-Pipe Dreams bitch is owned by the Original Syndicate and had 14 starts in Victoria for wins at Shepparton and Sandown before being dispatched to Tasmania.

Night Train produced another honest effort and took his place tally to 10 from 23 starts but he also has won five times to stake earnings in excess of $10,000.

Hellyeah Sam was making up good ground at the business end of proceedings while Jomad, that was attempting to make it four wins on end, lost all chance when he was checked soon after the start and again when making a run down the back stretch.