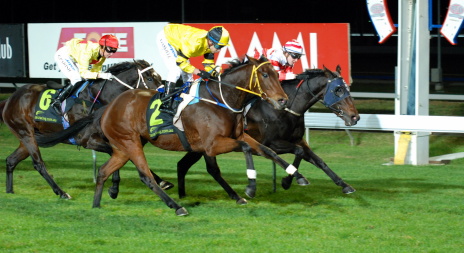 IN FORM six-year-old Omega Quest may have earned a crack at weight-for-age level following another impressive win in Launceston tonight (Thursday).

Omega Quest made it a hat trick of wins (3) when he powered home to win the Brendon McCoull benchmark 78 Handicap over 1600 metres with top jockey Stephen Maskiell in the saddle.

He hit the line about a half-length clear of three-year-old Ben Annalou with Jymcarew a closing third and just in advance of Handsome Target.

Omega Quest’s trainer George Blacker said the gelding had struck a purple patch and deserved the chance to be tested in the weight-for-age St Leger over 2100 metres at The Tote Racing centre next Thursday night.

“The horse is going extra well and while he’s in form we might as well have a look at the St Leger next week,” Blacker said.

At one stage earlier in this horse’s career connections were looking at the major cups but he got galloped on badly and he spent a lot of time recovering.

“He has never raced better so if he comes through this race well then he will more than likely step up to the St Leger but I’ll make a firm decision over the weekend,” Blacker said.

Omega Quest (West Quest-Nevertrice) has started only 32 times for seven wins and as many minor placings for almost $70,000.