On step at a time for Charlie James 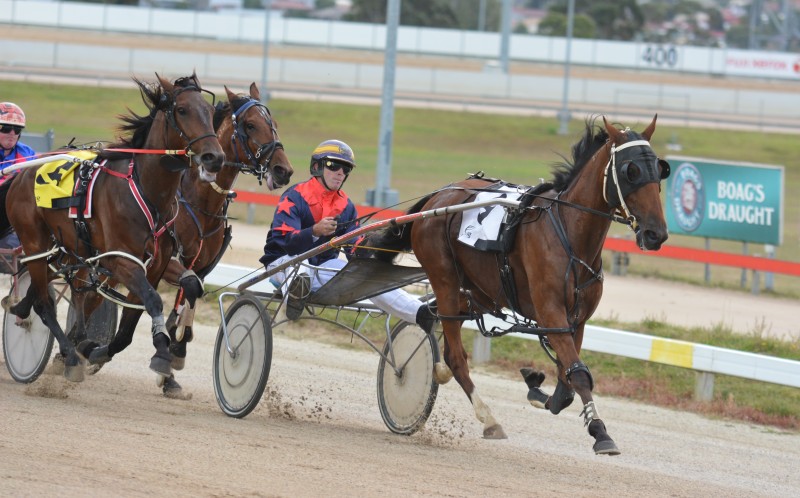 TALENTED Tasmanian harness racing trainer Rodney Ashwood has taken his time with well-bred gelding Charlie James and it would appear the patience has paid dividends.

Charlie James (Grinfromeartoear-Imbula) led throughout to score an emphatic win in the Office National Pace (2090m) at Tattersall’s Park in Hobart on Sunday night.

It was ore like a stroll in the park for the gelded son of Grinfromeartoear and driver Rohan Hillier had no need to use the persuader at any stage.

Charlie James is owned by Jamie Cockshutt and Barry Cooper who have enjoyed much success in recent years.

They purchased Charlie James from former Tasmanian Darren Jacobson who was having the hose broken in by Ashwood who mentioned to Cockshutt that he horse (then a yearling) was for sale.

“We paid $8000 for him because he was by a good sire from a mare that was well performed winning about 16 races but he was such a nice type that we decided to take the punt,” Cockshutt said.

“He looked like being real good as an early two-year-old, especially after he won is first race but then he started to grow and he had to be tipped out.”

“He had a couple of little issues that had to be ironed out and we eventually got him back to the race.”

“We were very pleased with this win and even though it was only a small field of five he did everything we hoped he would.”

“There’s no doubt he has a long way to go before he will be competitive against the real good ones but we are hoping he has what it takes,” he said.

Cockshutt and Cooper have 18 horses on the books, four of which are yearlings domiciled in New Zealand.

“Barry and I have invested a fair bit over the years but we’ve had a lot of success, especially with the ones we have bought in New Zealand.”

“Barry always wanted to name a horse after his grandson and he was waiting for one that he believed would win races and this bloke has so far lived up to expectations,” Cockshutt said.