Our Chain Of Command salutes in Cup 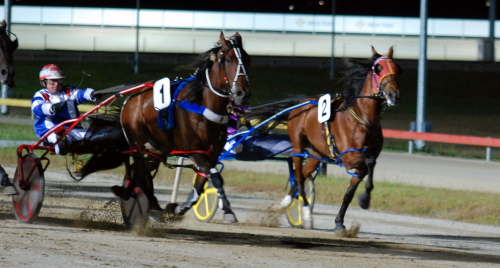 Our Chain Of Command was resuming from an 18-week spell but made light of the task to claim the lead in the home straight and then stave off a late challenge from Village Of Dreams to defeat that horse by a half-head with former New Zealand mare Glenferrie Alexis two metres away third.

Our Chain Of Command is trained at Lara by Dean Braun and was driven by ace reinsman Chris Alford.

Alford said he had hoped to lead but opted to take the sit behind local favourite Gedlee that was sent out the popular elect at $3.20.

“The plan was to lead if we could but the plan B was to take a sit if Gedlee led and that’s the option I took,” Alford said.

“When Gedlee kicked clear near the home turn we got the opening and my horse sprinted well and I thought he was going to win by panels.”

“About 80 metres out he started to feel the pinch but he held on for what was a very game win,” he said.

It was a great training feat by Braun to have the horse fit enough for a first-up tilt at Group 1 level.

It was Alford’s fourth Tasmanian Group 1, having been successful twice aboard Tailamade Lombo and once with Golden Reign when the race was known as the Tasmanian Pacing Championship and run at he old Hobart Showground.

While the local hero Gedlee missed a place he was far from disgraced.

He led for most of the race and skipped five metres clear of his rivals turning for home but his driver Sam Rawnsley said he had nothing left 150m from home.

“I knew I had the horse outside me beaten (The Gunstar) but he started to reef and tear so I let him rip and he put five metres n them but he’d had enough 100m out,” Rawnsley said.

The connections of Gedlee have decided to send the stallion to the paddock and confirmed last night he will not campaign interstate until next season.